New article published in PLos One

Mária Pukáncsik and Kinga Nagy article is published in PLos One.

Hereby you may find some highlights making you eager to read this very interesting article.

A novel uracil-DNA degrading protein factor (termed UDE) was identified in Drosophila melanogaster with no significant structural and functional homology to other uracil-DNA binding or processing factors. Determination of the 3D structure of UDE is excepted to provide key information on the description of the molecular mechanism of action of UDE catalysis, as well as in general uracil-recognition and nuclease action. Towards this long-term aim, the random library ESPRIT technology was applied to the novel protein UDE to overcome problems in identifying soluble expressing constructs given the absence of precise information on domain content and arrangement. Nine constructs of UDE were chosen to decipher structural and functional relationships. Vacuum ultraviolet circular dichroism (VUVCD) spectroscopy was performed to define the secondary structure content and location within UDE and its truncated variants. The quantitative analysis demonstrated exclusive α-helical content for the full-length protein, which is preserved in the truncated constructs. Arrangement of α-helical bundles within the truncated protein segments suggested new domain boundaries which differ from the conserved motifs determined by sequence-based alignment of UDE homologues. Here we demonstrate that the combination of ESPRIT and VUVCD spectroscopy provides a new structural description of UDE and confirms that the truncated constructs are useful for further detailed functional studies. 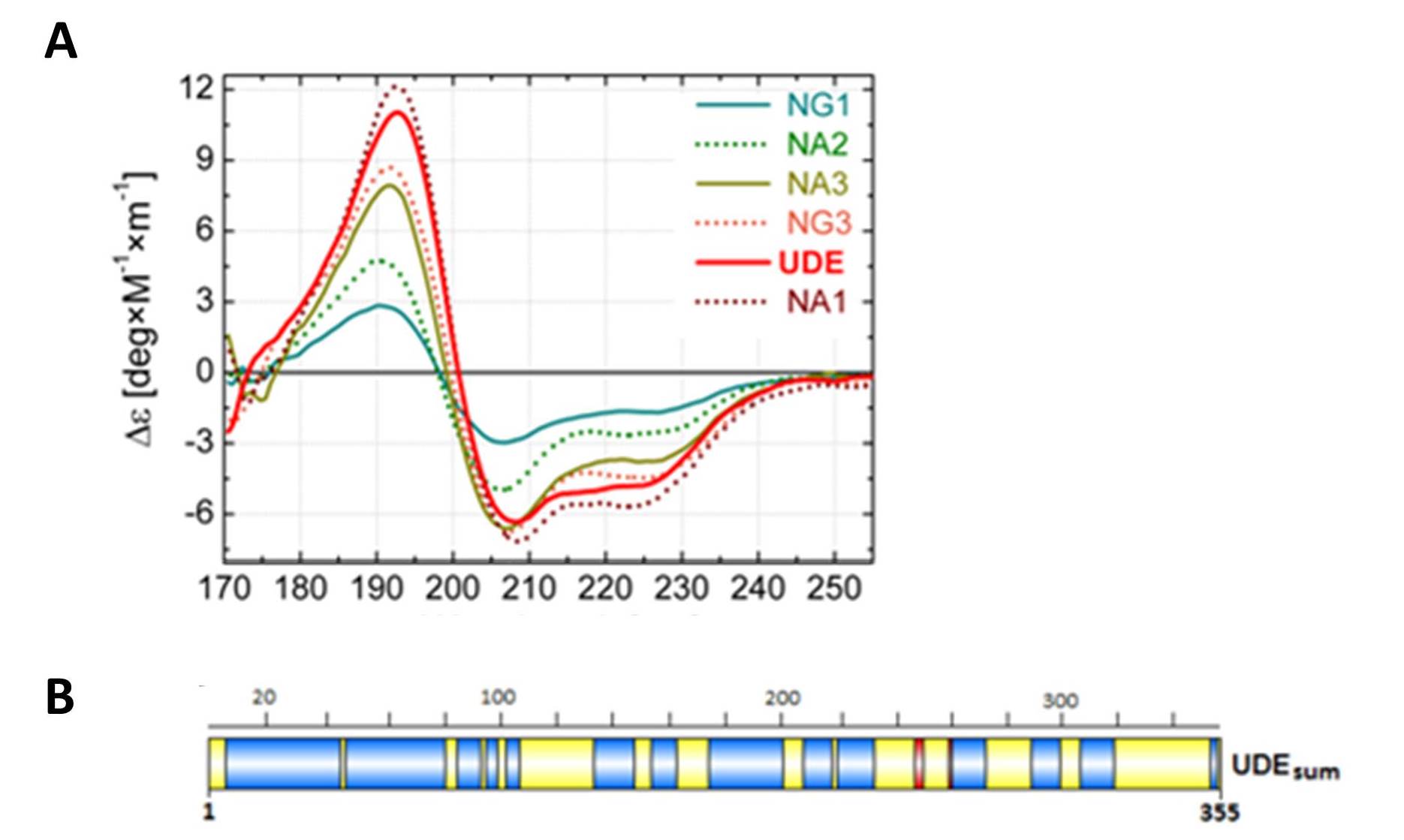 A) Secondary structure content determination of UDE and its fragments using VUVCD and SELCON3 program. Vacuum-ultraviolet circular dichroism (Δε) spectra of the UDE protein and some of its truncated fragments measured over the wavelength region of λ=170-255 nm. spectrum of UDE is shown in red. B) Final estimate for the secondary structure of UDE obtained as an average of the structure of full-length UDE protein and in its nine truncated fragments were determined from the CD spectra and the amino acid sequence using a neural network algorithm. The α-helical segments and β-strands are displayed in blue and red, respectively, while both turns and disordered parts appear in yellow.