Beáta G. Vértessy, Chair of Board of the US-Hungarian Fulbright Foundation, signed agreement with Prof László Lovász, President of the Hungarian Academy of Sciences for joint support

The Hungarian Academy of Sciences, represented by its President, Professor László Lovász, and the Hungarian-American Fulbright Commission, represented by Board Chair Professor Beáta Vértessy and Károly Jókay, Executive Director, signed a multi-year agreement on March 23, 2016, in the the ornate concert hall in the Academy’s main building. Fulbright Board members Tamás Magyarics, Tibor Frank and Eric Watnik (representing the US Embassy) also took part in the ceremony. 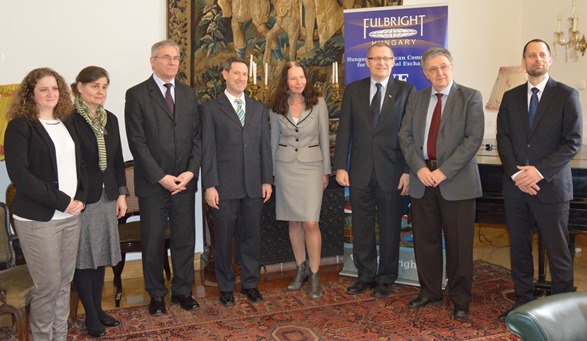 The agreement will support Hungarian scholars who are employees of the Academy’s research network, on various “Momentum” (Lendület) teams, or are active in Academy-funded projects at Hungary’s universities. During the upcoming academic year 2016-17, two Hungarian researchers will be in the US on jointly-funded Fulbrights: one geophysicist and one astrophysicist. US scholars will also be eligible for the joint grants, and in 2016-17, one US sociologist will arrive in Budapest.

The Academy and Fulbright expect that up to 4 additional scholars per year will be able to conduct research in the US and in Hungary based on the terms of the agreement just signed.

For US scholars interested in applying for the 2017-18 Academic Year, see the CIES catalog of awards at:
catalog.cies.org

For further information contact the Fulbright Commission in Budapest at: This email address is being protected from spambots. You need JavaScript enabled to view it.