RNA viruses continue to challenge the human population. The recently appeared SARS-CoV-2 virus join the list of numerous noxious pathogens, such as Ebola, Hepatitis C, Zika, dengue fever virus, and of course the previously encountered coronaviruses SARS and MERS. Despite the grave danger constituted by these pathogens, there is a considerable lack of detailed knowledge of many viral mechanisms and efficient therapies not only for the new coronavirus but also for many other single stranded RNA viruses (as well as other infectious microbes). Our major aim is to understand how the positive single stranded (+)ssRNA viruses regulate replication of their genome while also providing mRNA for translation of viral proteins. It is well known that these processes require a complex interplay of several viral proteins, the RNA-dependent RNA polymerase and its associated partners, as well as the host cell framework, and its endoplasmatic reticulum. We investigate these protein – membrane interactions in reconstituted in vitro systems with a complex methodology of structural biology (solution studies and X-ray crystallography) and cell biology. 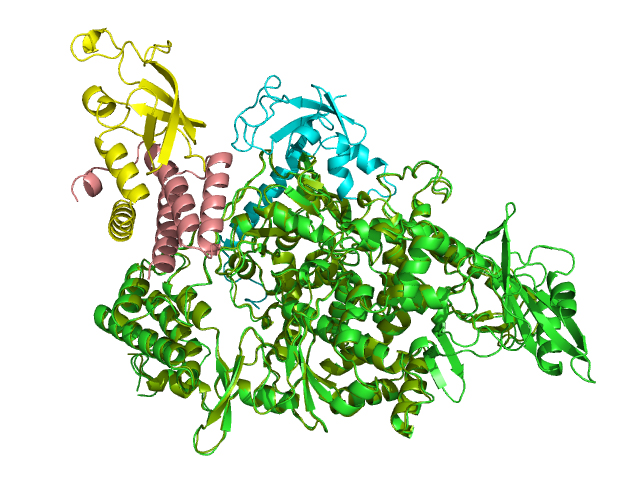 Conventionally, deoxyuridine incorporation into DNA is regarded to represent erroneous lesions, however chemical features of the uracil base does not show a remarkable difference from thymine except from a single methyl group at  the 5th position of the pyrimidine ring. As the balance of the cellular nucleotide pool is deterministic in the quality of DNA synthesis, dUTPase catalyzing the hydrolysis of dUTP is a major player in the maintenance of this balance and uracil-free genome. Our research is focused on the genome metabolism of uracil substituted DNA in the framework of a new paradigm, suggesting that deoxyuridine lesions might assign unique fate for DNA in special cases. These cases are extensively studied recently by a set of research groups including ours.  The special instances in which the presence of uracil was verified to have a unique role are the following:

We focus on some of the above mentioned or other examples of uracil-DNA mediated cellular events. We employ this paradigm on model organisms such as mammalian or tumor-derived cell lines and Drosophila melanogaster. The physiological role of uracil substituted DNA is studied either genome scale by methods of molecular and cell biology. In Drosophila, complex developmental consequences are also examined in our lab.

Almost all organisms employ a cluster of metabolic enzymes devoted for thymine biosynthesis in order to utilize thymine bases instead of uracil in their genome. The medical significance of this metabolic pathway is marked by the fact that nearly one-third of anti-cancer drugs used in clinics are targeted against thymidilate biosynthesis (such as fluoro-pyrimidines, anti folates) potentially inducing the so called thymine-less cell death. Personalized medicine aiming to minimize side effects and maximize the efficiency of chemotherapies requires prior knowledge about the characteristics of tumorous cells in order to predict the desired effect of a particular drug. Detailed mapping of protein networks participating or being affected by thymine-less cell death help us to estimate the receptivity of tumorous cells for drugs targeting thymidilate biosynthesis. We would like to contribute for this knowledge through our research that includes the characterization of thymine-less cell death. We especially aim to explore the involvement of dUTPase in the cellular process of thymine-less cell death.

The bacterial genom frequently contains mobile genetic elements, which can replicate more or less independently from the bacterial chromosome. Some of these are phage related such as the pathogenicity islands (PIs), which have significant biomedical importance, since these are responsible for horizontal transfer of several toxins and virulence factors (for eg. the toxic shock syndrome).

Phage mediated mobilisation of some Staphylococcus aureus PIs are induced by formation of a repressor:derepressor complex of the Staphylococcal repressor protein (Stl) with a phage-related dUTPase. Studying the detailed mechanism of this interaction can provide much needed deep insight into bacterial gene expression regulation pathways, and potentially facilitates the design of new anti-bacterial compounds. In this project we investigate this system using various in vitro techniques ( native gel electrophoresis, electrophoretic mobility shift assay, steady-state and transient kinetics, VIS and fluorescence spectroscopy, mass spectrometry and X-ray crystallography).

Cells maintain a fine-tuned concentration balance in the pool of deoxyribonucleoside 5’-triphosphates (dNTPs). The perturbation of this balance results in "mutator" phenotypes characterized by increased mutation frequencies. Genotoxic stress acts upon the dNTP pool directly and also via the SOS response to DNA damage. Our model is Mycobacterium smegmatis that shares the DNA metabolic and repair pathways with the tuberculosis bacterium, Mycobacterium tuberculosis. This intracellular pathogen is exposed to harsh genotoxic conditions by the host immune defense against them. It is therefore of major importance for these bacteria to develop strategies for the adaptation to genotoxic environmental conditions. We hope to understand how the changes in the dNTP pool possibly promote drug resistance as part of the adaptation to genotoxic stress. 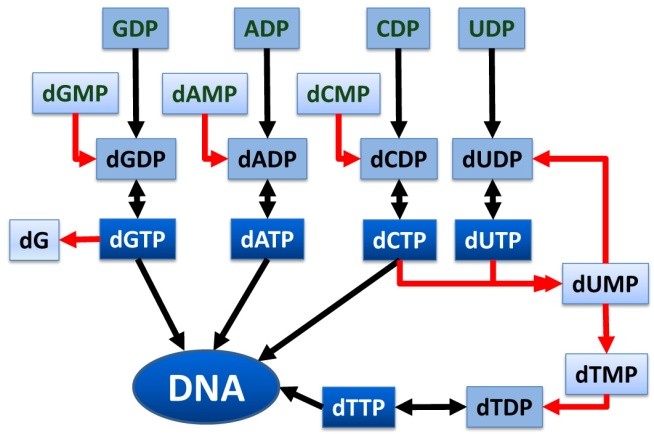 Red arrows indicate reactions catlyzed by specific enzymes while all other enzymes are non-specific for the nucleobase. In addititon to the four canonical dNTPs, dUTP, damaged dNTPs and the NTPs can also be incorporated into DNA to a lesser extent.

Cells maintain a fine-tuned balance of deoxyribonucleoside 5′-triphosphates (dNTPs). The perturbation of this balance results in increased mutation frequencies, replication arrest and may promote cancer development. The size and constitution of the cellular dNTP pool is therefore an important indication for several processes with poor outcome for the cell. To determine cellular dNTP pools, radioactive and mass spectrometry-based assays have long been available. These are precise and sensitive, but tedious and/or hardly available for most researchers. An easily accessible, TaqMan-like dNTP quantitation assay was finally published. But unfortunately, it failed to produce reliable data in most biological samples. Our group identified and overcome the difficulties of this assay and published a new kinetics-based analysis method. We automated this analysis process in the nucleoTIDY software thus offering an easily accessible and high-throughput method.

Our new technique greatly accelerated different key projects in the lab involving dNTP metabolism. We identified the effects of various antibiotics on Mycobacterium smegmatis dNTP pools as part of a hot topic investigation: finding how antibiotic resistance genes develop. Also, we use our method for the determination of the dNTP pool in various developmental stages of the causative agent of malaria infection, Plasmodium falciparum. We also study dNTP levels in zebrafish embryos at different developmental stages. 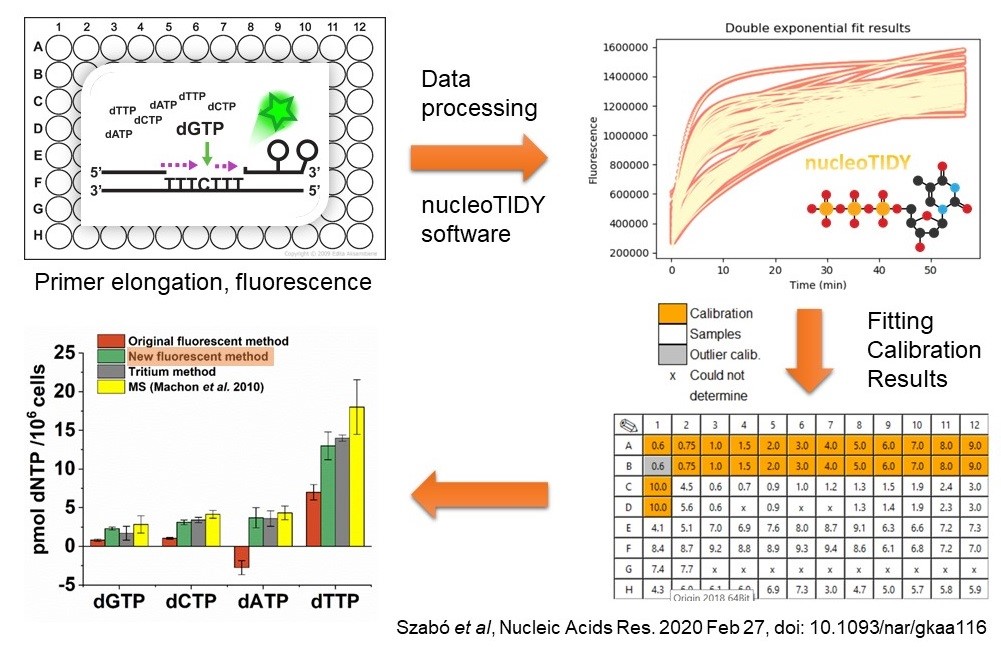 Maintenance of genomic integrity in the malaria parasite Plasmodium falciparum

Our research focuses on the maintenance of genomic integrity and characterization of molecular background of the quick adaptability of the malaria parasite Plasmodium falciparum. Previously, we showed the constant presence of uracil, a non-canonical base in the genomic DNA of P. falciparum throughout its intraerythrocytic life cycle. This phenomenon raised the question of the involvement of DNA repair pathways in the genetic variability of the parasite. We want to further elaborate on the molecular mechanism behind the exceptional ability of the parasites to emerge resistance in an accelerated rate.

We primarily focus on the base excision repair (BER) pathway of the Plasmodium falciparum parasite. The BER pathway is well-known in other eukaryotic organisms, however it remains poorly characterized in P. falciparum. Our goal is to characterize the proteins that are responsible for the initiation of the BER pathway known as DNA glycosylases. The two non‑canonical bases that could be of outmost interest are uracil and 8-oxo-guanine and their respective glycosylases, uracil DNA-glycosylase (UNG) and 8-oxo-guanine-DNA-glycosylase. We want to characterize the impact of the CRISPR-Cas9-based knockout of these proteins on the mutation rate and whether it leads to in increased rate of emerging resistance. Furthermore, we want to follow its localization and expression throughout the intraerythrocytic life cycle of the parasite.

Additionally, our other objective is to determine the amount of deoxynucleotides (dNTPs) throughout the life cycle. The maintenance of genomic integrity heavily relies on the ratio of dNTPs. A perturbed dNTP pool leads to mismatches during the DNA replication, as the high-processivity of DNA polymerase can overcome the lack of complementarity. It is especially notable in case of dUTP and dTTP, as their respective bases uracil and thymine only differ in a single methyl-group. UMP is an important precursor of both dCTP and dTTP, therefore its presence is inevitable. Moreover, in Plasmodium falciparum the biosynthesis of dTMP requires the synthesis dUTP, which could potentially lead to the incorporation of dUTP during replication. By elucidating the dynamics of dNTP biosynthesis, we could understand the key steps that could be exploited as antimalarial drug targets and what is their impact on genomic integrity under drug pressure.